1. Reports Menu #9
2. Make sure that the current event number on the Server or Main PC is the same event
which has the special event. Go to the Reports Menu and click “9- Special Event
Entries”. 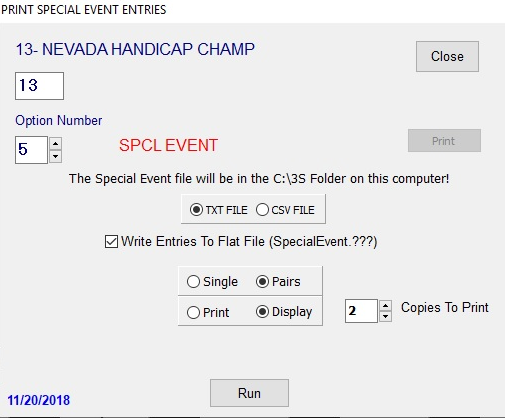 2. Verify that the correct event and option numbers are selected, select which type of report
you want to generate, single shooter or shooter pairs. If you select the “Pairs” button the
system sorts the shooters who are in the Special Event by yardage, Low ydg to high ydg.
It then splits the sorts into two sections and lists a short yardage shooter with a long ydg
shooter. You can also write these shooters or pairs to a CSV file that you can then import
into a spreadsheet program. The next example shows the entries in pairs as printed from
the system 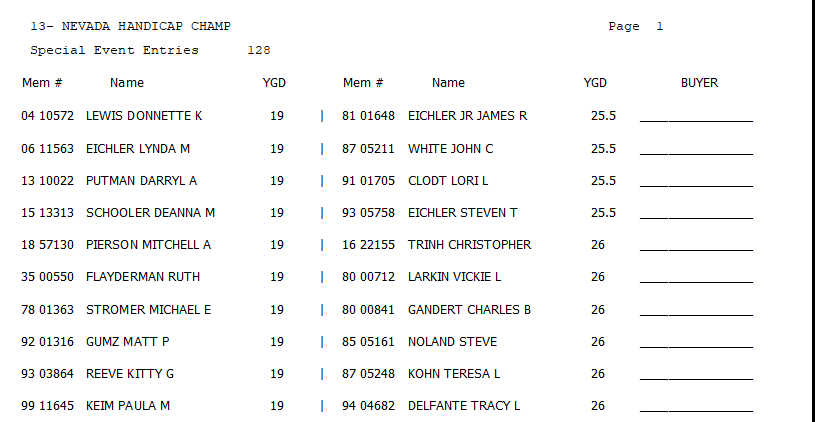 The example below shows the same report but this time it is the flat file that was written to the
3S folder on the PC you are running the report on. 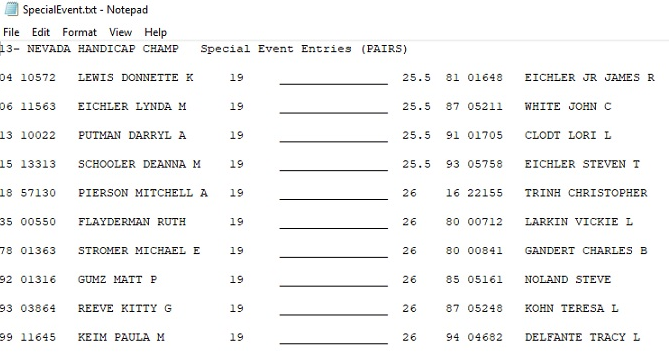 1. Payoff Menu #6 – Create Bid Number
2. After clicking the payoff button and selecting the Special Event button the screen below
will appear.
3. Next click on the Create Bid Number button, the system responds by bringing up the
next screen which allows the user to start creating the Bid number to be assigned to
anyone who wishes to take part the in the shooter auction.
a. In order to be assigned a bid number.
EACH PERSON MUST BE AN ACTIVE SHOOTER IN THE TOURNAMENT.
If a person wishes to be included without being an active shooter then you MUST
create a temp number and add them into the tournament as if they were going to
be shooting. ( ADD BUYER AS SHOOTERPage 136). 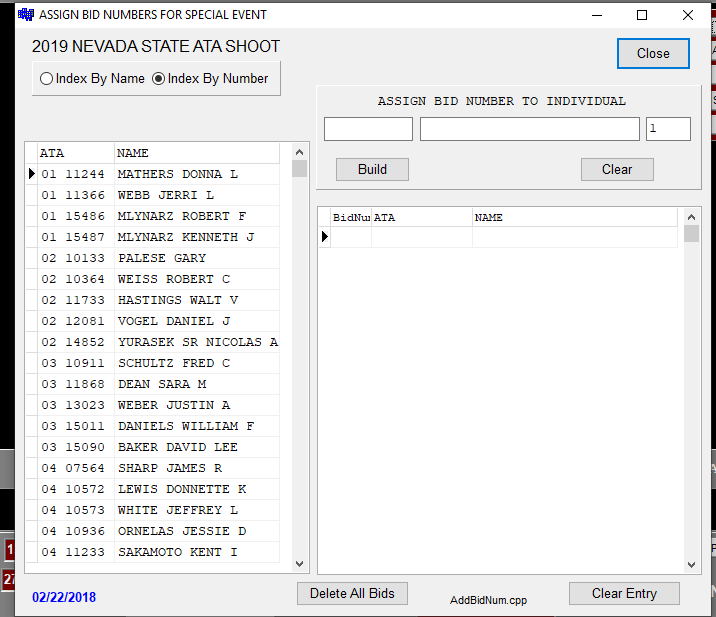 4. The next screen has a grid on the left side of the form which shows the shooter entered
table. This is where each buyer / bid number will be created from.
5. Locate the person you wish to add (you can sort by name or number)3
6. Double click on the person who is the bidder
7. Click Build
8. Repeat steps 4-7 until you have added all of your buyers. 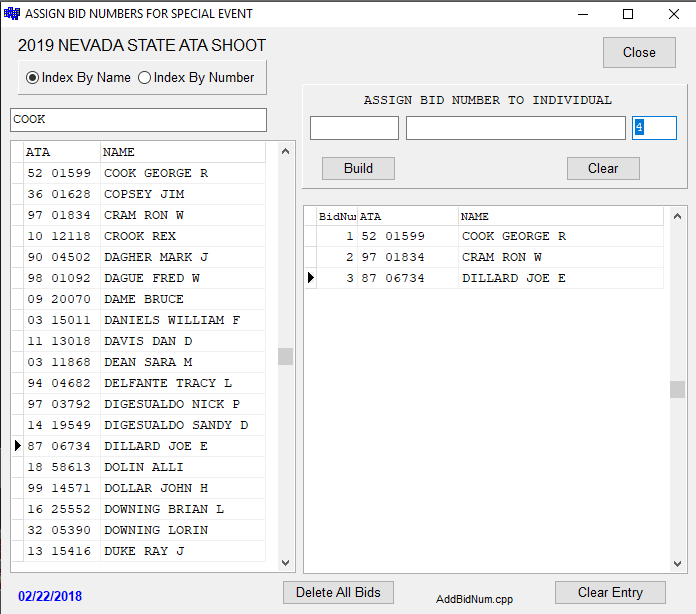 Payoff Menu #6 – Add Buyers / Auction
The next step in the special event payoff setup is to track the auction of the shooters or shooter
pairs. The steps are somewhat simple but you need to make sure that you do the steps in the
proper order which will insure a smooth auction and later collection of the bid amounts. The Add
Buyers / Auction button will start by bringing up the following screen and data grids. 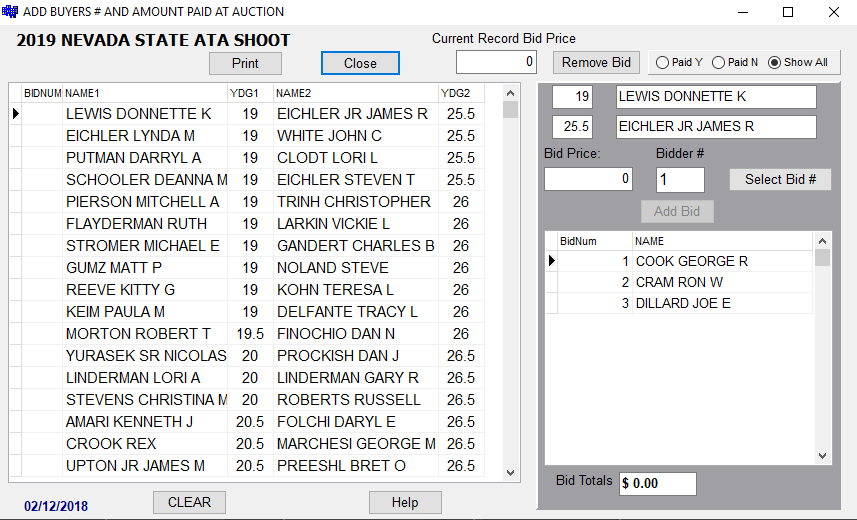 As you can see by the grids above the data shown here is the entries for the special event, in this
case the pairs of shooters on the left. And on the right is the grid displaying the bidders in
sequence. As you are the tracker for each bid it is highly recommended that you have an extra set
of eyes to help you keep up. The proper sequence is to
1. Enter the TOTAL bid price after the shooter has sold into the Bid Price edit box.
2. Once the total bid has been entered you locate the bidder who purchased the pair and
double click on the record. This transfers the bid number to the pairs record.
3. You then click on Select Bid # , make sure that the info is correct
4. Click on the Add Bid button.
The bid will be logged, the record pointer will drop to the next pair of shooters and you repeat
the process.
The running bid totals are shown at the bottom.
If you make a mistake you click on the remove bid button and the data for the current pair will be
cleared. This next screen shows the progress of the auction. 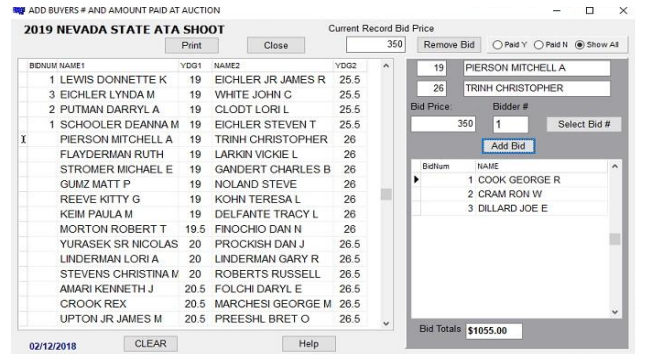 Payoff Menu #6 – Pay For Bids
This is where you collect money for the purchases made on the shooter pairs. This is
accomplished by running payoff #6, Pay For Bids. the following screen will appear: 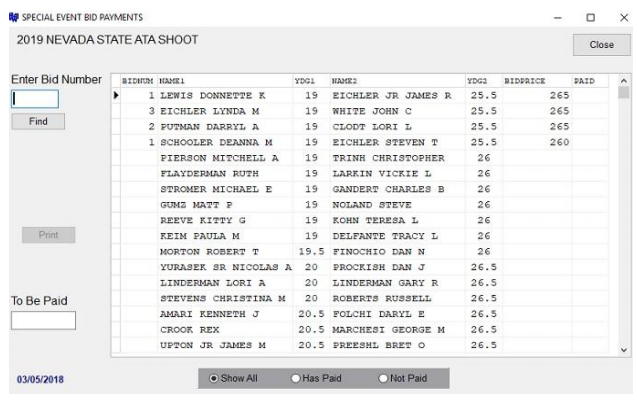 The grid above shows the shooter pairs and at the left side of the grid shows the bid number of
the person who purchased this pair of shooters. All the you need to do is to
1. Enter the shooters bid number who wants to pay for their purchase in the Enter Bid
Number box
2. Then click the Find button.
When you do this the main grid will be filters to only show the pairs in the grid who were
purchased by the bid number that was entered.

The grid now shows all purchases by bidder number 2 with the total due at the bottom left of the
screen. Bidder #1 must pay $525.00 to the shooters who were purchased.
Once you are complete
1. Click the print button and the system will print a receipt for the buyer.
2. Click on the small printer icon at the top of the report.
Once the report has printed the report will close and you can then collect from the next bid
number in line. 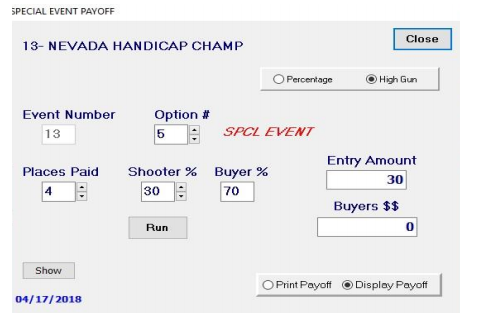 The settings show that the option will pay 4 places.
The splits for buyer / shooter are 30% Shooter and 70% Buyer.
The payoff is to be done via the High Gun Method rather than percentage (Ties Divide).
The entry amount is taken from the Event Option table and is added to the total to be paid.
You must enter the total amount of the bids that were taken in.
Enter this number under Buyers $$ 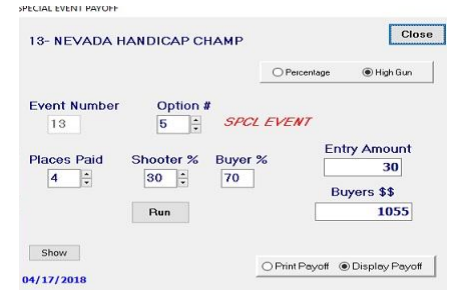 When you run the payoff the resulting report will look like the report shown below. This example
is for testing purposes only but it shows who won how much and there is a blank line where the
buyers name will show up after you finish this payoff.

The report itself is pretty much self explanatory in that it shows the amount won by the shooter,
then the blank line for the buyers name and then how much was won by the buyer for this
particular pair of shooters. The total paid is show as the Shooter Entries plus the Buyers total.
This is then split 4 ways, 40 / 30 / 20 / 10 (High Gun) with 30% of the place going to the shooter
and 70% going to the buyer.

Payoff Menu #6 – Write Buyer Payoff
The last part of the Special Event payoff is to generate the report showing the buyers and their
part of the Special Event Purse according to the amount they won for each pair of shooters who
they purchased shot a score that was included in the payoff.
When you run the next portion of the payoff, Payoff #6, Write Buyer Payoff. This next screen
will appear. 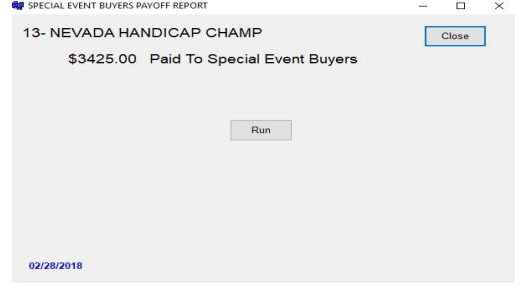 This first screen simply shows you that an amount of $3,425.00 was paid to the buyers on the
Special Event payoff. When you click the Run button the system generates a report showing the
buyers who were paid and the total amount each buyer was paid.

When you run this report the system then takes each buyer and adds the amount won to their
event payoff file into the Spc Evt Buyer bucket. At this point the last thing you should do is to
run Payoff Utilities Menu 4, Shooter Event payoff, and look at the last page summary and insure
that the amount paid to the buyers matches the amount shown in the report just shown. 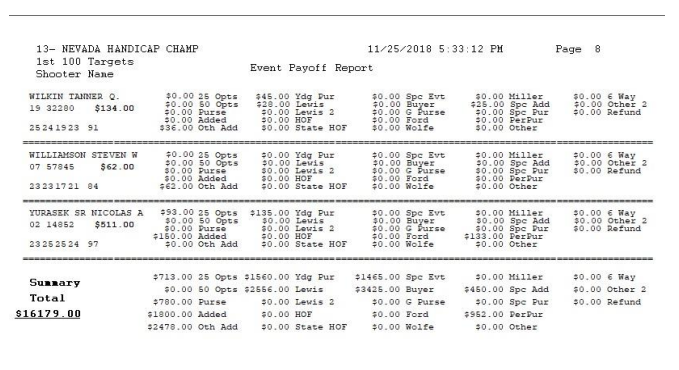 If you reference page 138 of this document you will see that the total paid to the shooters was
$1465.00 and total paid to the buyers was $3425.00.
At this point the payoff for the special event is complete and the system has all of the
information added showing the shooters portion won in the shooters payoff record and the buyer
amount will have been added to each buyers record. You have checked to make sure the amounts
are correct and are ready to print checks or payoff with cash.

1. Add a new shooter to the tournament as seen in ADD NEW SHOOTER on page 43
2. Now in the quick button bar click Enter like you would if you were cashiering a shooter. 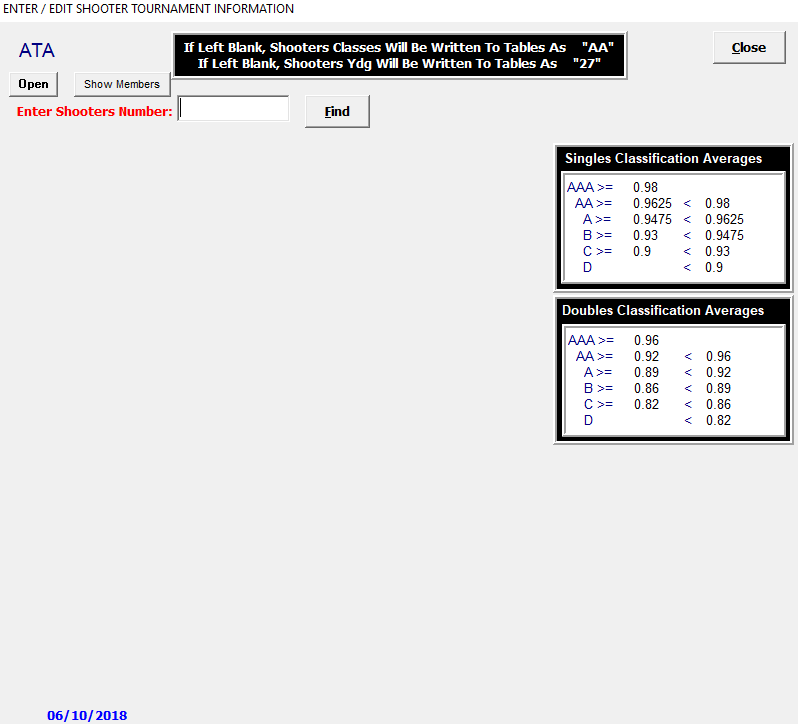 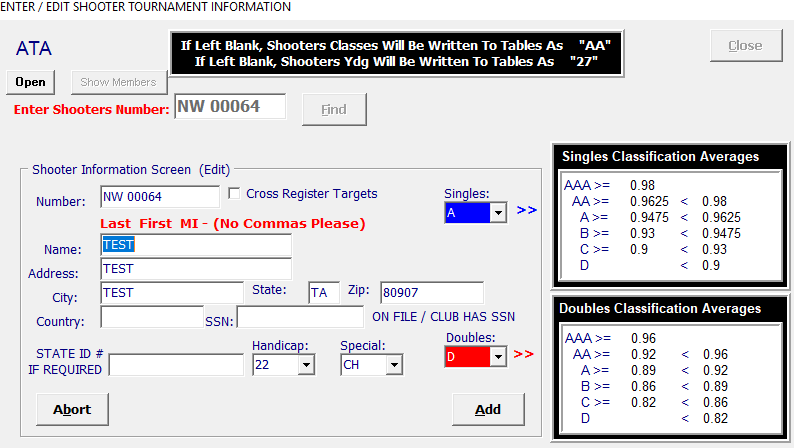 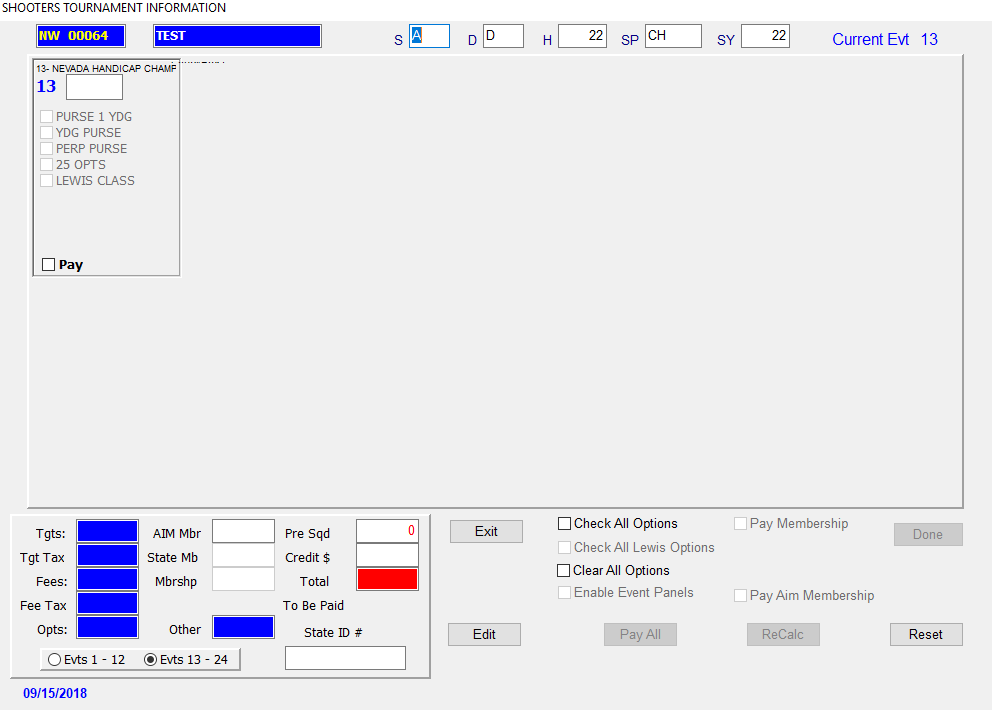 7. Now click the Exit button
8. Now the new member has been added and can be used to create a new buyer.